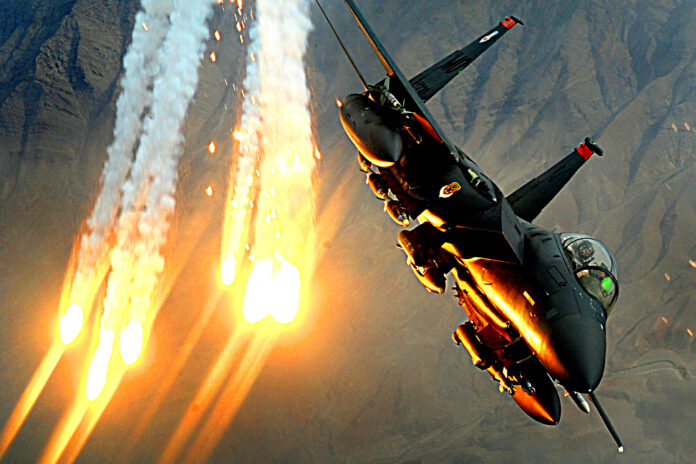 A US Air Force F-15 contender stream killed a robot said to have come from Iran after it was considered a danger to troops positioned in eastern Syria Saturday.

‘Alliance airplane effectively connected with and crushed a UAS through aerial commitment nearby Mission Support Site Green Village,’ US Army Colonel Wayne Marotto, who heads the US-drove alliance against ISIS, told Reuters, utilizing an abbreviation for an automated airplane framework.

Fox News correspondent Lucas Tomlinson said an F-15E shot the ‘Iranian’ drone, which flew ‘excessively near’ the 900 US troops nearby, as per a tweet referring to US authorities.

Green Village is a station where US troops are housed in previous oil industry estates close to a significant Syrian oil field, as indicated by the Washington Post.

Independently, authorities disclosed to Aviation Week that the robot was ‘considered a danger and self-protection measures were taken.’

The Pentagon last month said it was profoundly worried about assaults on U.S. staff in Syria and Iraq.

Simply last month, two US administration individuals were injured after 14 rockets hit an Iraqi air base facilitating US powers, as per Reuters.

Iraqi local army bunches lined up with Iran had pledged to fight back after the US strikes on the Iraqi-Syrian boundary killed four of their individuals in June.

The most recent demonstration of power in Syria occurred as the US deals with a tumultuous withdrawal from Afghanistan, where the fear-based oppressor Taliban have taken over the vast majority of the nation and the US puts forth a valiant effort to clear American residents and partners.

The global alliance against ISIS, named Operation Inherent Resolve, was set up in October 2014 under President Barack Obama. It right now comprises 77 nations and five worldwide associations working in Iraq and Syria.

Recently, the US, the UK, Israel, and different nations faulted Iran for a ‘kamikaze’ drone that killed a Romanian and a British public on board an Israeli-worked dealer transport off the bank of Oman in July 30.

The upward blade of the robot recuperated from the MV Mercer Street was like other Iranian executioner drones, the US military said, as per the Wall Street Journal.

UK Prime Minister Boris Johnson told DailyMail.com at the time that ‘Iran should look up to the results of what they’ve done,’ adding that it was ‘obviously an unsatisfactory and ludicrous assault on business delivering.’

Since February, something like three other Israeli-connected boats has been assaulted in a similar district – remembering MV Helios Ray for February 25, off the shore of Oman, MV Hyperion Ray on April 13 off the shoreline of UAE, and CSAV Tyndall on July 2 in the Persian Gulf.

In May, the Israeli military delivered video of an F-16 warrior stream destroying another equipped self-destruction ‘kamikaze’ drone from Gaza.

That robot contained an 11-pound unstable payload, as indicated by the Times of Israel.

Hamas, which controls the domain, says the robots are gathered in Gaza, however, the Isareli military accepts that a considerable lot of the segments are snuck in.

Additionally in May, another Iranian robot was brought down close to the Israeli city of Beit Shemesh, around 19 miles west of Jerusalem, as indicated by the Jerusalem Post.