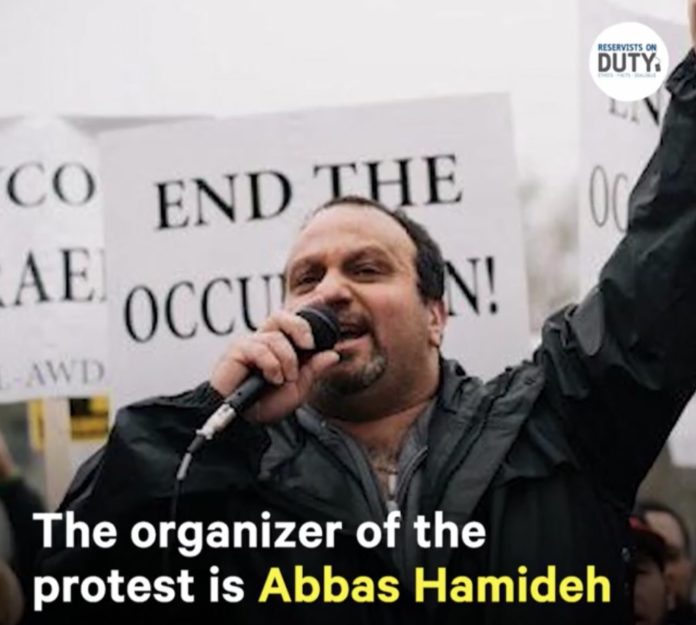 Abbas Hamideh, Tlaib’s pal and the organizer of the event, is one of the founders of Al-Awda, the Palestine Right to Return Coalition, an anti-Israel group that regularly vilifies Israel and opposes its right to exist. Al-Awda was the host of Sunday’s anti-Semitic hate rally.

Hamideh regularly praises Hezbollah and its leader Hassan Nasrallah. He also claims Jews have no history in Israel and that the Jews should “go back to Brooklyn.”

Following her swearing-in ceremony in Detroit, Congresswoman Tlaib hosted a private dinner for close friends and family. Hamideh was one of her guests.

At the rally, Hamideh took the microphone, chanting (in Arabic) that the entire region was ethnically Arab. Chanters also called for a violent intifada (uprising) to take over Israel, as well as “From the River to the Sea, Palestine Will Be Free” (code language for destroying Israel in its entirety).

Rally co-organizer Rami Ibrahim spent his time on the bullhorn justifying his support for violence. Ibrahim is a proud Hamas sympathizer with numerous social media posts supporting this terror organization.

Hamas is an openly anti-Semitic, genocidal organization whose stated goals are to kill Jews and establish an Islamic caliphate. Ibrahim is also a conspiracy theorist who believes that ISIS is a Jewish/Mossad plot.

Protesters first gathered in front of the White House and later marched to the DC Convention Center, where the AIPAC conference was being held.

Several speakers who took the microphone spent their time defining Judaism in an effort to justify why their anti-Semitism was not really anti-Semitism.

Eric Resnick of Jewish Voice for Peace Cleveland, who was carrying a sign, “Real Jews are not Zionist,” spoke to the crowd:

Resnick then accused the “Israel lobby” of buying the White House and Congress. He concluded by saying, “Zionists aren’t real Jews!”

Members of the minuscule fringe anti-Zionist Jewish orthodox group, Neturei Karta, carried signs, passed out flyers and gave speeches claiming they are the only “authentic” voices of religious Judaism.

Similar protests have gone on every year opposite the AIPAC conference, but the one silver lining was the fact that this year’s rally was noticeably smaller than in previous years.

Absent this year was former Al-Awda organizer and current Bernie Sanders surrogate, Amer Zahr. Zahr is usually a regular feature at this protest. Also absent this year were past co-organizers from the Party for Socialism & Liberation and ANSWER (Act Now to Stop War and End Racism) Coalition.

Perhaps Democrat candidate for president Bernie Sanders, himself a socialist, told his supporters to lay low this year.

Still, there was no lack of bigoted rhetoric, even without the normal participants.

At one point, one participant went a little too far for some of the others, shouting, “The Holocaust will come back to you. You’re going to get burned if you don’t give us the land! Hitler will come back! Burn! All of you!”