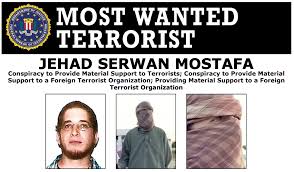 A U.S. resident on the FBI’s Most Wanted Terrorist List has been accused of extra violations including connections to Somalia’s al-Shabaab rebel gathering, as indicated by a government prosecution unlocked Monday.

Without giving points of interest, the new checks blame him for having key jobs in al-Shabaab exercises and offering material help from 2008 to 2017.

The FBI said it took in this year that he is a pioneer in al-Shabaab’s “explosives division.”

“Today, Mostafa is accepted to be the most elevated positioning United States resident battling abroad for a psychological militant association,” said Scott Brunner, the operator accountable for the FBI office in San Diego.

The gathering asserted obligation regarding two Sept. 30 assaults on U.S. furthermore, European military focuses in Somalia, including one by an expected 25 warriors who were executed when they attempted to storm the Belidogle military airstrip, which has Somali and U.S. powers.

Mostafa was conceived in Waukesha, Wisconsin, and brought up in San Diego, where specialists state he has family members. He moved on from University of California, San Diego in 2005 and — as indicated by a FBI banner contribution a $5 million prize for data prompting his capture — joined al-Shabaab around 2006.

Mostafa was among a bunch of youthful Muslims from the U.S. who took high-perceivability jobs inside the al-Qaida-connected extremist power.

He was once leader of the now-dead Muslim Youth Council of San Diego, which said on its site that it was “devoted to demonstrating the world that Islam is a religion of harmony and Muslims are a tranquil and beneficial piece of society.”

Mostafa’s dad, Halim Mostafa, a Kurdish Syrian, made a low-spending film, “Mozlym,” that was discharged in 2008 and charged as a push to show how the genuine importance of Islam is frequently lost in the midst of misguided judgments of non-Muslims in America.