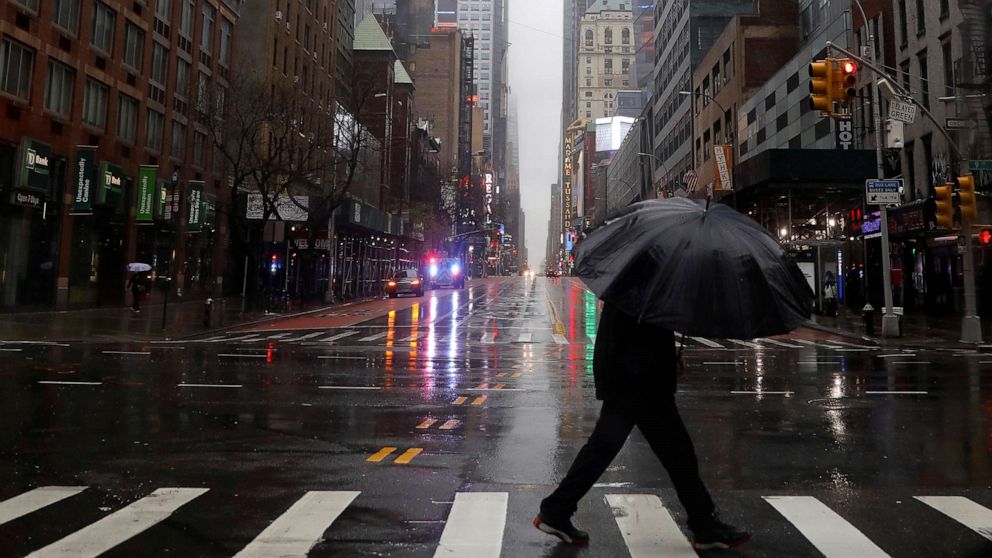 Gov. Cuomo grimly reported Monday that the coronavirus killed another 671 New Yorkers over the high holiday, bringing the state’s total death toll above 10,000 even as the pandemic scourge appeared to run out of steam on some fronts.

In his daily briefing from Albany, Cuomo said New York’s death count crossing the five-digit threshold on Easter Sunday hit him hard on a personal level.

“I’m Catholic. Easter Sunday is the high holiday … To have this happen over this weekend is really, really especially tragic,” Cuomo said. “They are all in our thoughts and prayers.”

Still, Cuomo had a glimmer of good news.

Even though 10,056 New Yorkers have now died from the virus, Cuomo said the daily death count has been “basically flat” for nearly a week.

The governor said the number of daily hospitalizations is also stagnant around 2,000.

“I think you can say the worst is over, because the worst here is people are dying,” he said. “We have controlled the spread.”

About 19,000 people remain hospitalized statewide, according to officials.

New York City continues to bear the brunt of the virus, accounting for more than half of all deaths in the state.

Cuomo suggested his next order of business will be to devise a plan for New York to get back on its feet.

The governor said such efforts would likely include expanding the definition for “essential” jobs to allow more New Yorkers to return to work.

Cuomo said he would coordinate any reopening announcements with the governors of New Jersey, Connecticut and other Northeastern states, adding he learned from Hurricane Sandy in 2012 that “geographically coordinated” action plans are necessary during crises.

“This is a time for smart, competent, effective government,” Cuomo said.

Cuomo discussed the matter on a conference call with some Northeastern governors Monday afternoon, including New Jersey’s Phil Murphy and Connecticut’s Ned Lamont.

The governor didn’t say during his Albany briefing whether he plans to extend the order.

Regardless, he said he will approach the next phase with extreme caution and noted that social distancing and employment restrictions may be reimplemented if a second wave of the virus hits once guidelines are eased.

“The worst is over, if we continue to be smart,” he said.