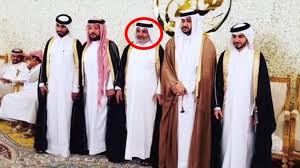 Al-Nuaimi was marked a psychological oppressor by the US government in December 2013, and the UN in September 2014, for offering money related help to fear monger associations.

The US Department of the Treasury said Al-Nuaimi, 64, gave a great many dollars to Al-Qaeda in Iraq.

Al-Nuaimi once in the past headed the Football Association of Qatar and was the organizer and a board individual from the Qatar-based Eid Charity that was recorded as a fear based oppressor element by Saudi Arabia, the UAE and Bahrain.

Al-Nuaimi was likewise among ten named on Qatar’s fear list discharged in March, this year.

Qatari paper Al Raya stretched out congrats to Al-Nuaimi on the marriage of his child. “Dr. Abdulrahman Al-Nuaimi commends his child’s wedding tonight. Congrats!” was the message distributed related to photographs of the wedding.

A few web-based social networking accounts having a place with Al-Nuaimi’s children, showed photos of the wedding highlighting various conspicuous Qatari characters. Among the visitors at the wedding was Abdullah Al-Sulaiti, who distinguishes himself as a “guide in the oil business, an essayist with the Qatari paper Al Raya, and previous editorial manager in-head of Qatari paper Al Sharq.”

The British government has as of late recorded Al-Nuaimi, the current leader of the Geneva-based Al-Karama Center for Human Rights, on their approvals list for associated subsidizing with aggressor gatherings. England’s choice came 10 months after Qatari Al-Nuaimi was put on a US ban list, a British government representative said.

The US Treasury Department said in December 2014 that Al-Nuaimi “is one of the most significant supporters of firm stance Sunni Iraqis in Qatar and is accepted to have moved more than $2 million every month to Al-Qaeda in Iraq over some undefined time frame.”