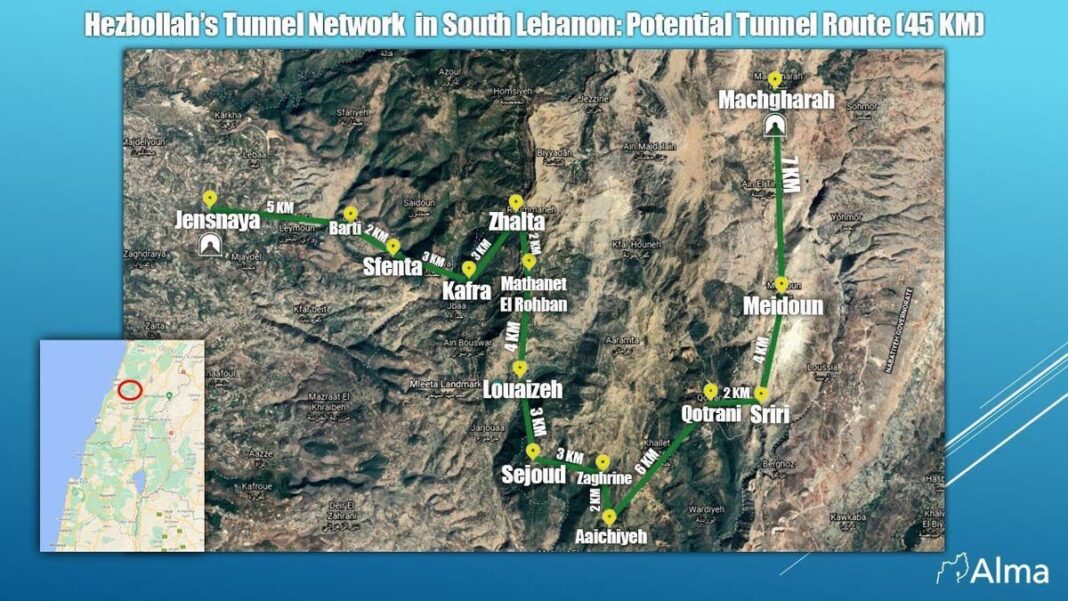 Hezbollah has assembled a 45-kilometer underground passage connecting Lebanon’s south with inland Beqaa valley under a $13 million arrangement with a North Korean organization gaining practical experience in the advancement of underground frameworks and with the oversight of an Iranian Revolutionary Guard Corps official, as indicated by a report delivered by Alma research focus.

The report uncovered that Hezbollah has developed a 45-kilometer burrow connecting the region east to the seaside city of Saida with the southern hilly areas of Jezzine and Rihan and the inland Beqaa valley.

“The ‘Place where there is the Tunnels’ was worked with the help of a North Korean organization represent considerable authority in the improvement of underground foundations, called the ‘Korea Mining Development Trading Corporation’ otherwise called KOMID,” the report added.

“The Jihad Construction Foundation utilized non-military personnel organizations to fill in as cover for the development of the ‘Place that is known for the Tunnels’. One of the organizations associated with the contribution in the development and nonmilitary personnel conceal is the ‘Bekaa Building and Contracting Company’, once in the past known as the ‘Iranian Authority for the Reconstruction of Lebanon’,” the report added.

The report likewise uncovered that the passages permit the moving of powers from one spot to another to build up safeguard positions or for completing an assault in a protected, secured, and undetectable way. In our evaluation, bikes, ATVs, and other little vehicles can likewise be moved through a portion of the passages.

In 2004, a Japanese writer named Takashi Arimoto gave an account of a gathering between Syrian President Bashar al-Assad and senior North Korean authorities, during which he looked for North Korean help for Hezbollah in the arranging and development of underground army bases, fortifications, and passages.

As indicated by extra data that the exploration has tracked down, the North Korean organization KOMID marked a $13 million arrangement with Hezbollah for the stock of designing materials for exhuming burrows, and furthermore, for the exchange of North Korean designing innovation to Hezbollah’s “Jihad Construction Foundation”.