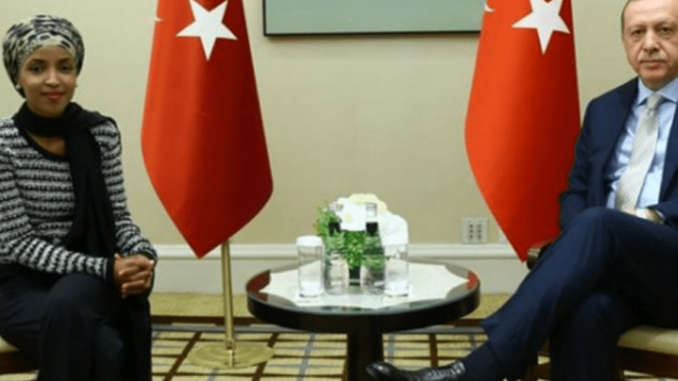 (New York Post)—–Special counsel Robert Mueller’s mandate defined “collusion” as “links and/or coordination” with foreign powers. Democrats and their media allies tried and failed to hang the charge around President Trump’s neck. But one of their own darlings, Rep. Ilhan Omar, has inarguably colluded with an unsavory Islamist regime: Turkey’s.

In fall 2017, Omar, then a state representative, attended a closed meeting with Turkish President Recep Tayyip Erdogan on the sidelines of the UN General Assembly. According to a report since deleted from a Somali-language periodical, Omar and the Islamist strongman discussed “issues involving Omar’s native Somalia and issues for Somalis in Minnesota. … The meeting ended with Erdogan asking Omar to voice her support for Turkey.”

A month later, Omar would take to Twitter to praise Turkey for providing airlifts for Somalis injured in a Mogadishu truck bombing.

Given recent concerns over foreign influence, one might ask: Why was this state representative meeting with the leader of an increasingly anti-American regime? With what authority was she negotiating Turkish-Somali relations or any foreign-relations matters?

Several months prior to the Erdogan sit-down, Omar and her then-husband, Ahmed Hirsi, met with Umat Acar, then the Turkish consul general in Chicago. Hirsi memorialized the meeting on Facebook, writing: “Turkey has been a friend to Somalis everywhere, and I look forward helping [sic] expanding our friendship for decades to come.” Acar would host Omar again in September 2018, according to social media, after she won the Democratic nomination to run for the House in her district.

Months before ever meeting Acar, Omar traveled to Istanbul with Hirsi for a “Human Rights Defenders” conference reportedly organized by Istanbul’s Sisli municipality, where she attacked the Trump administration’s travel ban against terror-producing nations.

The rapport deepened after she took her congressional seat.

In January 2019, the US-based, Turkish-state-funded ­Islamic Diyanet Center of America reported that several of its senior members had met with Reps. Omar and Rashida Tlaib of Michigan, congratulating the two new Muslim members of Congress and adding that it looked forward to “fostering a relationship between our institutions.”

Then, in April 2019, a pro-Erdogan Turkish newspaper ran an article soliciting campaign contributions for Omar, which was reprinted in other publications. The article defended Omar’s infamous comments about the “Israel Lobby” and argued that “donating money to Omar’s campaign fund would be an adequate way of denying powerful organizations the power to censor alternative voices.”

Last October brought news that Halil Mutlu, co-chairman of the pro-Ankara Turkish American Steering Committee, had donated $1,500 to Omar’s campaign. TASC lobbied against a 2019 House resolution recognizing the Armenian genocide at the hands of the Ottoman Empire.

As it happens, Omar was one of only two House Democrats not to support the resolution. In explaining her “present” vote, she drew a moral parallel between Turkey and America, asserting: “A true acknowledgment of historical crimes … must include both the heinous genocides of the 20th century, along with earlier mass slaughters like the trans-Atlantic slave trade and Native American genocide … in this country.”

Omar similarly bucked her party in voting against sanctions on Turkey over its incursion into northern Syria against Syrian Kurds, which passed the House with overwhelming support.

Writing in the Washington Post opinion pages, she claimed Turkish sanctions would prove ineffective and perhaps harmful. But she didn’t pause to explain why the same couldn’t be said for the sanctions she supports against Israel; Omar is a keen backer of the Boycott, Divest and Sanction movement targeting the world’s sole Jewish state.

All this should be alarming. Omar sits on the House Foreign Affairs Committee and co-chairs Democratic front-runner Bernie Sanders’ campaign in Minnesota. If Sanders wins the White House, she will no doubt reap foreign-policy rewards, and so might Ankara. If Democrats are worried about collusion, why don’t they look into Omar’s?