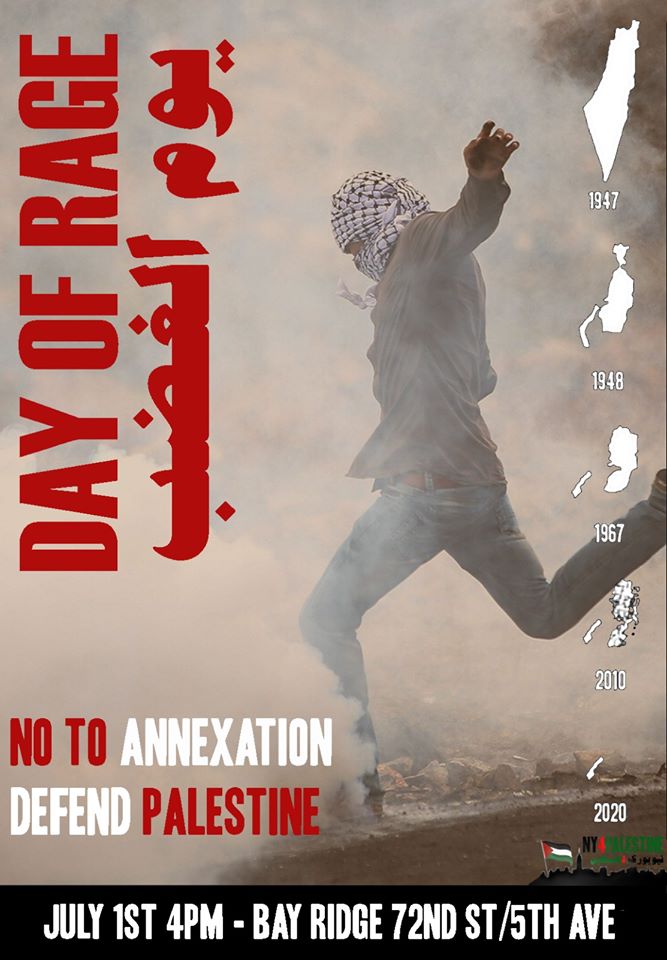 In excess of 1,000 nonconformists rioted of Brooklyn on Wednesday as a major aspect of a global “Day of Rage” contrary to Israel’s occupation and addition of Palestine.

The gathering — drove by individuals from more than 40 grassroots associations over the city — walked from Bay Ridge to the Barclays Center, beginning at around 4 pm and closure at 10 pm. Around twelve cops in revolt gear kept nonconformists out of the boulevards, and trailed them on their way to the Fort Greene scene — and for a short stretch in Bay Ridge, a little gathering of counter-dissenters assembled over the road from speakers waving Israeli banners and Trump standards.

The serene exhibit went ahead the day Israel took steps to dispatch its conventional addition of parts of the involved West Bank related to President Donald Trump’s “tranquility plan.”

The day of dissent was held in association with exhibitions over the globe, just as in the involved West Bank and Gaza Strip. In Gaza City, the Associated Press revealed, a huge number of dissenters walked with Palestinian banners and signs criticizing the addition plan as a “revelation of war” on the Palestinian individuals.

The Brooklyn-based Day of Rage was sorted out by NY4Palestine, an alliance of Palestine solidarity associations in and around New York City, and Within Our Lifetime, a Palestinian-drove network association. Inside Our Lifetime’s objective, as indicated by its site, is to “renew the progressive soul of the Palestinian diaspora to supplement the obstruction in Palestine in quest for a free country.”

Nerdeen Kiswani, seat and prime supporter of Within Our Lifetime, said she was moved by the show’s various turnout.

“Not exclusively was the Palestinian people group out there yet so were such huge numbers of individuals from various foundations,” Kiswani said. “We had a great deal of Black individuals remaining with us, particularly with everything continuing, saying you can’t bolster Black Lives Matter and not bolster Palestine — which was marvelous.”

On Twitter, the gathering flaunted Wednesday’s lead serenade: “Not simply extension, not simply occupation. Battle for freedom, cut the entire thing down.”

The message Kiswani trusts individuals will bring home from the worldwide Day of Rage is that the dangers to Palestine are — and have been — continuous. “This is the same old thing what they’re doing with extension,” she revealed to Brooklyn Paper. “Since the time 1948 when Israel was first made — that was the biggest addition of Palestinian land — and it’s something that proceeds right up ’til the present time. We’re not simply battling against the occupation and extension of Palestine, we’re battling for full and all out freedom of all Palestinian land.”