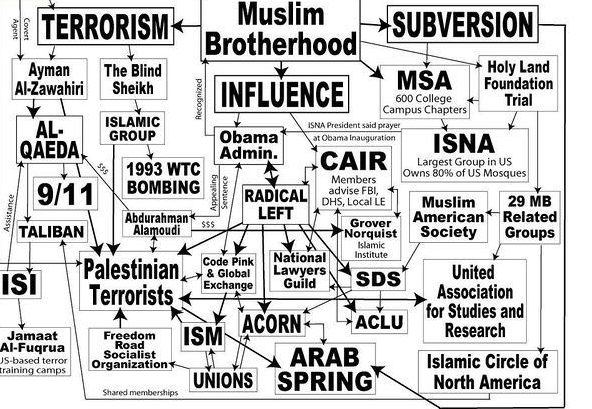 CAIR stands for The Council on American-Islamic Relations, was born in 1994. This organization is listed as non-profit, NGO. The main headquarter is in Washington, DC in United States. The organization is known to advocate American people through Islamic perspective. CAIR was formed to fight anti-Muslim discrimination nationwide.

The founders of this organization were linked with IAP which stands for Islamic Association for Palestine. The IAP was the reason of birth of CAIR. After the World Trade Center attack the organization came under FBI radar a meeting was held in Philadelphia. It was attended by many Hamas leaders and they wanted the new organization to be less conspicuous and more effective. Here is the script of some leaked conversation between leaders. http://www.investigativeproject.org/documents/misc/185.pdf.The founder of CAIR openly accepted having ties with Hamas during his speech in Barry University. Till today’s date US in unable to label CAIR an organization supported by terror groups and leaders. But FBI cut ties with NGO.

CAIR supporters in US government:

Despite the issue that CAIR is supporting or supported by Islamic activist or terrorist groups there are many members in US government associated with the organization. Recently 100 members of congress wrote letter to support the CAIR. 97 of them are democrats. Click here to see the names of supporting members.

The other well-known names for getting a big chunk of donation from this organization is Ilhan Omar and Rashida Tlaib. Ilhan Omar has attended CAIR’s fundraiser on many occasions. She has targeted FBI database for listed CAIR’s name in terrorist screening database. The website accused Ilhan Omar attended fundraiser events, not open to public and possibly tied to Islamic terror groups. The following table shows receiving funds from CAIR as well from other groups.

FBI memo shows money transfers to many organizations. The memo included list of persons and groups having ties with HAMAS, known as specially designated terrorist. The list also included the name of Rashida Tlaib’s representative from Michigan. Her campaign received donation from Salah Sarsour who has ties with Hamas. Tlaib campaign did not respond to any allegations.

CAIR researchers have found that there are 1,096 organizations funding politics, education and lobbying groups to advance anti-Islam.

According to an article the funding to Islamists organizations has increased under Trump administration. The amount increased from $4 million to $13.5 million. The funding increase reason is unknown.

Few months ago, CAIR received $100,000 through Department of Homeland Security under a grant program. CAIR as already reported under many investigations known a wing to Hamas.

Saudi Prince Alwaleed bin Talal will pledge $32 million to advance the Islamists. Saudi is known to spend money on building mosques in America and 80% mosques built in America are Saudi funded. Like many other Muslim brotherhood CAIR is also known to be funded by Saudis.

At the end, to cover CAIR just as an organization or NGO will be wrong. CAIR was found by group of people supporting Hamas initially. It is powerful Islamic front group in America. The organization has labeled itself as a defendant of Muslim civil rights. To my surprise that even NGO is listed as a threat to America, it is still active till todays date. It’s been running for more than 50 years and their purpose is to destroy other religion and be dominant. I believe the information should be preached in US and across the world to tie their hands. US government can act at different levels that should include FBI, CIA, local and federal governments and public.