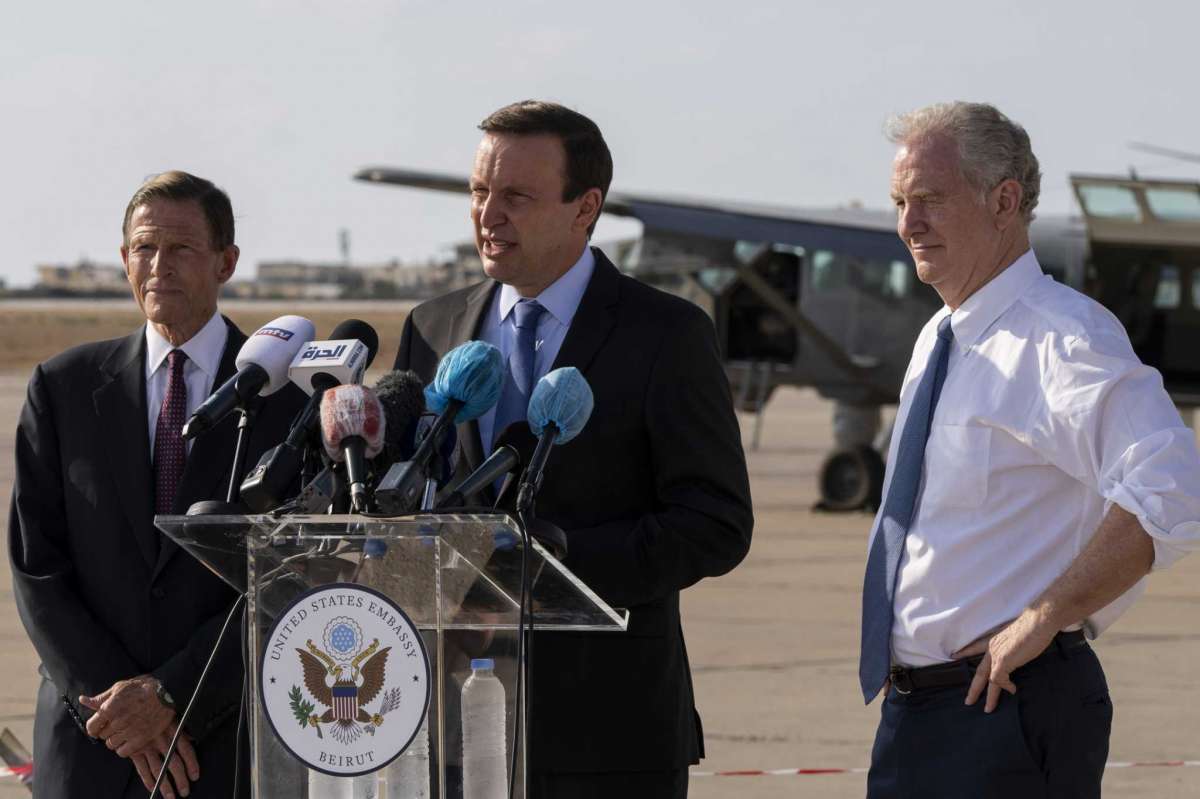 Lebanon is in free fall and must not become a “horror story,” a US senator said during a visit to Beirut on Wednesday, voicing hope that a government would be formed this week to start addressing its destabilizing financial meltdown.

The comment reflected growing concern about the situation in Lebanon, where a financial collapse that began in 2019 hit a crunch point last month with a crippling fuel shortage that sparked security incidents and warnings of worse to come.
Another senator in the US congressional delegation warned that the import of Iranian oil into the crisis-hit country, at the request of the heavily armed Shiite terrorist group Hezbollah, could have “severely damaging consequences.”

The Democratic senators pushed for the immediate formation of a Lebanese government that can begin urgent reforms. They also vowed support for Lebanon’s US-backed army.

The financial crisis marks the biggest threat to Lebanon’s stability since the 1975-90 civil war. More than half of Lebanon’s 6 million people have fallen into poverty. The World Bank says it is one of the sharpest depressions of modern times, with the currency plunging more than 90% and the financial system paralyzed.

“Lebanon is in free fall… We’ve seen this movie before and it’s a horror story… but the good news is it can, should, and hopefully will be avoided,” Senator Richard Blumenthal told reporters at the end of a two-day visit.

Blumenthal of Connecticut blasted Hezbollah as a “malignant cancerous terrorist organization” adding that they have heard “very troublingly about maligned Iranian influence particularly in providing fuel.”

Blumenthal added that there is no reason for Lebanon to depend on Iran because there are plenty of “other sources of fuel without the potential of severely damaging consequences of reliance on Iranian oil.”
Lebanese politicians, who have failed to do anything to arrest the collapse, have been squabbling for more than a year over the make-up of a new cabinet to replace the one that quit in the aftermath of the Aug. 4, 2020, Beirut port explosion.

A new cabinet capable of implementing reforms is a necessary precursor to foreign aid. The United States is the biggest foreign aid donor to Lebanon.
The congressional delegation met Lebanese leaders including President Michel Aoun, the Maronite Christian head of state, who expressed hope the government would be formed this week, the presidency said in a statement.

Aoun, a Hezbollah ally, has on several occasions expressed optimism about the government being agreed soon.

“We did hear good news today,” Senator Chris Murphy, chairman of the Senate Foreign Relations Committee panel dealing with the Middle East, told reporters, adding he expected a government would be formed by the time he returned home.
“It is inexcusable that in the middle of this life-threatening crisis, the political leaders in Lebanon have refused to make the tough choices in order to form a government,” Murphy told reporters.

Aoun’s adversaries accuse him and his faction, the Free Patriotic Movement, of obstructing the government formation by demanding a third of the seats, or effective veto power.

Aoun denies this. Aoun told the senators “many obstacles had been overcome,” the presidency said.

With the state floundering, Hezbollah, a long part of the ruling system, last month announced it was importing fuel oil from Iran, saying it aims to ease the crisis. Its adversaries have said this further undermined the authority of the state and exposed Lebanon to the risk of US sanctions.

Washington designates Hezbollah as a terrorist group.
Lebanon’s caretaker energy minister said on Wednesday that an import permit had not been requested for the fuel shipment.

The United States has been in talks with Egypt and Jordan over a plan to ease Lebanon’s power crisis. The Lebanese presidency has said it involves using Egyptian gas to generate power in Jordan that would be transmitted via Syria, which is under US sanctions including the so-called Caesar act.

“The complication as you know is the transport via Syria,” said Senator Chris Van Hollen. “We are looking for ways to address that despite the Caesar act.”
Blumenthal added that the senators were exploring very specific ways to bring the current pay of Lebanese troops to the level where they were before the crisis, “maybe even higher.” He did not elaborate how but said they will discuss it back in the US with the congressional armed services committee.

“The armed services in this country is the glue that holds the country together in many respects,” Blumenthal said.