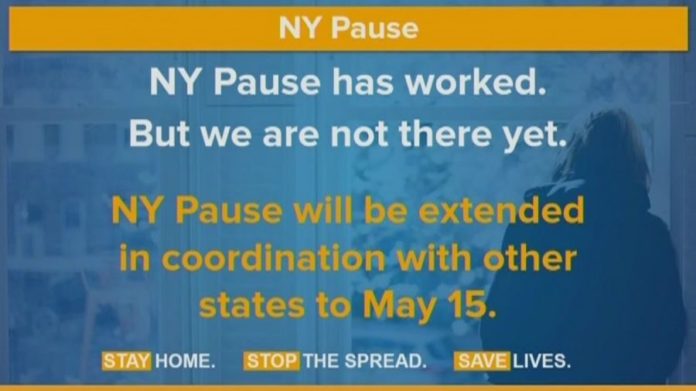 New York state’s social distancing policies will remain in effect until May 15 to curb the spread of the coronavirus, Gov. Andrew Cuomo announced Thursday.

The governor issued an executive order March 20 canceling nonessential public gatherings and mandating that nonessential workers remain home. Cuomo on March 29 extended the order to at least April 15, at which point the policy would be reviewed every two weeks.

The executive order has been effective, but there is still a risk of increasing the virus’s rate of infection, Cuomo said at a press conference.

“I don’t want to project beyond (May 15),” Cuomo said. “One month, we’ll continue the closedown policies. What happens after then, I don’t know. We will see depending on what the data shows.”

New York state has reported 606 deaths from the virus since Wednesday, its lowest number in the past 10 days. The coronavirus causes COVID-19, a respiratory disease that has infected 222,284 people in New York state and killed 12,192.

“We can control the spread,” Cuomo said. “We did not know for sure we could do that. Now we know.”

Early projection models assumed a much higher rate of infection, which is why experts originally believed the state would need more hospital beds, Cuomo said. If the projected rate of spread had occurred as predicted, the state’s health care system would have been in a much worse place, he said.

“That has not happened, so far,” Cuomo said. “We slowed the infection rate by our actions, and that’s why we are in a better place today.”

Private businesses have a responsibility to limit the risk of infection in the workplace, Cuomo said. Employers should ensure social distancing can be practiced in the workplace and determine how many employees can continue to work from home, he said.

“Tell us how you intend to organize and conduct your business, and can you do it in a way that poses a lower risk?” Cuomo said.

Cuomo announced at a briefing Wednesday that he would issue an executive order requiring everyone in New York state to wear a mask in public. He further explained this policy at Thursday’s briefing.

The order will go into effect Friday at 8 p.m., Cuomo said Thursday. Masks should be worn in any public setting where social distancing cannot be practiced, such as on public transportation or when using ridehail services.

Wearing a mask is one of the best ways to decrease one’s risk of infection, although it may be irritating, he said.

“Is this inconvenient? Yes,” Cuomo said. “(But) this is a precaution for everyone that I think balances individual liberties with a social conscience.”

Individual actions and compliance with social distancing measures make all the difference in curbing the spread of the virus, he said.

“Be smart, and gage what you’re doing relative to everyone else and relative to the overall goal,” he said.