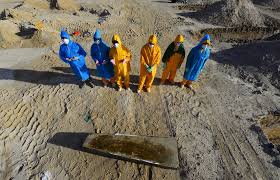 With bodies piling up at hospitals and morgues, and funeral homes turning families away due to a lack of capacity, New York City has been stretched to its limits by the COVID-19 pandemic.

The crisis has touched thousands of grieving families, virtually all of which have been forced to navigate chaos after their loved one’s death from the deadly respiratory virus.

The funeral process can be even more complicated for Muslim New Yorkers, who make up about three percent of the population across the city’s five boroughs, because a series of religious practices guides the burials.

“It’s overwhelming – just the amount of illness, the amount of deaths,” said Imam Khalid Latif, executive director of the Islamic Center at New York University (NYU), about the general feeling in the city.

He said that early on, it became clear that “funerals and things happening at end of life were likely really difficult for a lot of people” in the Muslim community.

“A lot of people [were] reaching out saying, ‘We just can’t connect to anybody, and the places we are connecting to, they’re telling us it’s going to be days before anything can actually happen’.”

An Islamic funeral service in New York City would typically cost around $2,000, including a plot of land for burial, Latif said, but these days, some members of the Muslim community said they were being charged around $10,000.

“In Islam, the funeral rites are considered a communal obligation,” he told Al Jazeera. “Here, we have a responsibility to ensure that people who can’t afford it are still able to have it done.”

Financial concerns are especially prevalent among people employed in public-facing industries – such as taxi or Uber drivers, restaurant staff, or construction workers – who have taken a hit during the pandemic.

In New York state, funeral homes and cemeteries have been designated as essential services, but the government urged them to avoid in-person gatherings. “If in-person services must be held, the gathering should be limited to only immediate family, with as few persons physically present as possible,” the state said in a letter to funeral directors on April 10.

As a result, the Muslim community – like other religious groups across the United States – has had to adapt to meet public health recommendations designed to reduce the potential spread of the coronavirus.

Mosques have shuttered their doors, and Friday afternoon prayers – as well as other practices, such as halaqa (communal religious gatherings) and khotba (the sermon before Friday prayer) – are taking place online instead. Some families are live-streaming funerals, as well.

Despite those stop-gap measures, uncertainty around burials remains a source of concern.

A rumour that Muslims were being buried in mass graves recently ripped through the community, said Raja Abdulhaq, executive director of Majlis Ash-Shura Islamic Leadership Council of New York, an umbrella group for over 90 mosques and organisations.

In a news conference on April 9, New York City Mayor Bill de Blasio said each body “will be treated individually and specifically” and burial plans will be coordinated with the families of the deceased.

“We clearly have painful but real contingency plans to deal with anything that might come up ahead, but with a very clear standard: dignity for the families. Every family is treated individually,” he said.

In Islam, the body of a deceased person is washed and shrouded, a prayer is performed, and then the body is buried directly into the ground without any embalming, explained Latif, the NYU imam.

But he said that in exceptional circumstances, such as during today’s COVID-19 pandemic, when some of those religious practices cannot take place for whatever reason, alternatives are possible.

“An individual will essentially tap their hands on clean dirt or earth, and positions their hands then on different parts of the deceased’s body as a purification process in lieu of the washing,” Latif said, by way of example. That process is known as tayammum.

Latif acknowledged that many community members are still struggling with what to do when a loved one passes away, or when people get sick with COVID-19.

“It’s really hard for people right now who are losing loved ones because there’s so much happening that prevents them from being there with them.”

He encouraged people to reach out to one another to stave off isolation – especially in New York City, a place that he said can be particularly lonely. “It’s an unprecedented time,” Latif said. “And where government has failed and has not done its part, we just need to step up and do what we can and come together.”